Logga Mikiel Anton Vassalli No. I 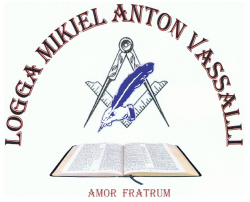 Logga Mikiel Anton Vassalli  No. I

The former name of Mikiel Anton Vassalli Lodge No I was the Leinster Lodge No 387 of the Irish Constitution. After a petition by several Irish Masons the Lodge was granted a warrant on the 1st November 1851 and held its first meeting on the 12th January 1852. The meeting was held in Floriana and the first Master was Brother Edward Greshen.

It was the early custom of the Lodge to elect a Master every six months so that between January 1852 and December 1874 no less than 32 brethren passed through the chair! In 1874 the term of office was altered to a twelve month tenure.

During the first thirty years of its existence over 750 candidates were initiated.

In April 1899 the Lodge decided to ‘sign a memorial for the application fro a Warrant for new Lodge to be called Abercorn’ and which was granted on the 6th June.

The Lodge met at 177 Strada San Guisseppe, Senglea but moved to 204 Strada Vittoria, Senglea in 1906.

In October 1915 a letter was read from Bro W Martin stating his adventures whilst a prisoner of war in Mexico. He stated that his Grand Lodge Certificate saved him from being shot!

When in January 1932 the question of the purchase of Blye’s Hospital as a Masonic Hall for the use of Irish and Scottish Brethren was raised. It was resolved that ‘the financial reserves of the Lodge be loaned to the Masonic Hall Committee’. The ceremony of dedication of Villa Blye was performed by W Bro A.M.MacFarlane on the 20th August 1932

In 1948 the brethren of the Irish Lodges in New Zealand presented to the Irish brethren of Malta, in commemoration of the heroic defence of the island in 1940-1945, three handsome chairs for the WM, IPM and PGM. The chairs are made of various woods and the back panel of the PGM’s chair is taken from the Arapuni forest allegedly buried for 4015 years. Lodge St Patrick No 468 at Dunedin, New Zealand presented a set of working tools.

A magnificent brass bound Holy Bible was presented to the Lodge by Bro. the Reverend A. Hempenstall to mark the association the Lodges had with the 41 Royal Marine Commando Group.

In August 2004, the Leinster Lodge No 387 together with Abercorn Lodge, Fenici Lodge and Hospitaliers Lodge resolved to surrender their Warrants to the Grand Lodge of Ireland and simultaneously initiate new Warrants under the registry of the newly consecrated Sovereign Grand Lodge of Malta.

At a ceremony conducted by the Grand Lodge of Ireland the SGLOM was consecrated in November 2004 and the Lodge now perpetuated its existence but under the new name of Mikiel Anton Vassalli Lodge.

The Lodge continued to meet at the Masonic Hall Villa Blye in Paola.

In 2011 the Lodge moved to and meets at the Masonic Hall 6 & 7 Marsamxett St Valletta, under the registry of the SGLOM and is a regular lodge in Maltese Masonry.

We're not around right now. But you can send us an email and we'll get back to you, asap.

In accordance with GDPR 2018, we use cookies to ensure that we give you the best experience on our website, including security of all data contained herein. If you continue to use this site we will assume that you are happy with it.Ok